What do you do when you take an impromptu trip to Toronto? An escape room of course! I have heard of these previously and have always wanted to try one so why not do something new on vacation? If you ever enjoyed playing games like clue as a kid you will love this attraction. It really feels and plays like a lifelike board game, but instead of playing against your friends you have to learn how to work together to find your way out. My friends and I took on "The Da Vinci Code" game, which was explained to us by their very friendly staff as being the hardest game at the time. They also explained that they actually put in a lot of research before creating these games and will change them up from time to time. The game actually ended up being a bit more difficult than we thought it would be and I highly recommend bringing plenty of smart friends with you as the two friends I was with were not able to get us out of the rooms in time. We had a lot of fun though and time flew by extremely fast trying to figure out all the clues. Give it a try(I plan on doing more of these now), I'm sure you won't be disappointed!

Sophie Neveu's Grandfather Jacques Sauniere has been murdered at the Louvre. He has given you a key (The Fleur de Lis), and you and your team have been intrusted to find the famous "Holy Grail". In order to complete this quest, your team must ultimately find the cryptex and unlock it using the secret code! Our finest game to date, 'The Da Vinci Code: Quest for the Cryptex' is an adventure that will promise you and your team a thrilling experience with all new puzzles, tasks, and mysteries. We invite you to take the ultimate challenge and beat Da Vinci and his secret code in one hour!!! 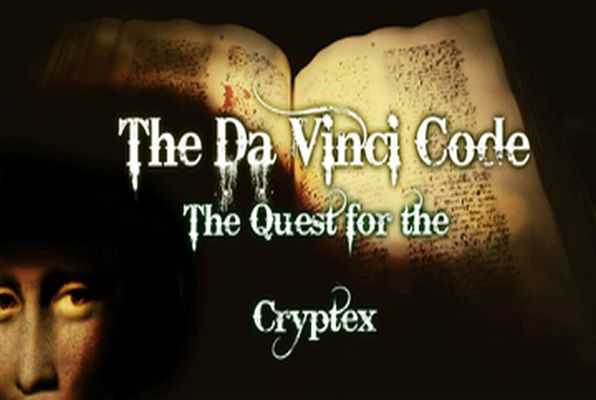